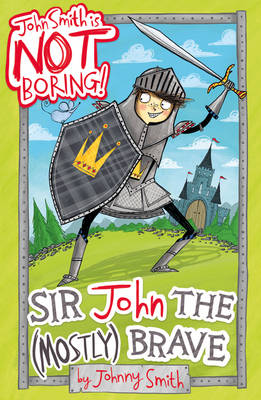 'My name is JOHN SMITH. Dad says with a name like John Smith no one
will EVER make fun of you. Mum says I'm 'one in a MILLION'. But
just because I got what my sister calls 'the most BORING name in
the history of names..,.' do not judge a book by its cover. My
life is ANYTHING but boring! But here's this thing you should know:
I have this massive, massive, MASSIVE secret. I can travel into
other worlds and go on AMAZING adventures. Granddad was an adventurer
too. It's this big thing we share. Granddad says we're members
of something called the John Smith Club. He says you don't have
to have a fancy name to have a big adventure - just because you
sound like a NOBODY you might be a SOMEBODY. Granddad says if
you meet somebody called John Smith, he might have this BIG secret
too. I joined the John Smith Club on my last birthday and since
then I've been on all kinds of incredible escapades. So now you
know.'

Laura Ellen Anderson Biography
Laura Ellen Anderson is a British author and illustrator who has just published the second book in her new series, Amelia Fang, who she describes as a modern day Wednesday Addams from the Addams Family. Laura has illustrated many children's books

John Smith is Not Boring! BOOKS