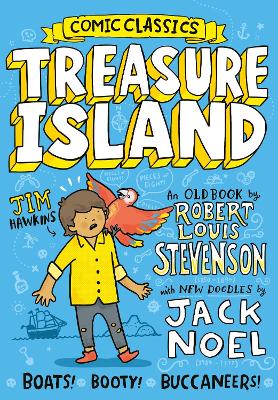 OLD books get NEW doodles - it's the classics as you've never seen them before!
A hilarious new series that brings the classics to life with illustrations by Jack Noel. Perfect for 7-9 year olds and fans of Tom Gates, Wimpy Kid and Dav Pilkey. And PIRATES.
Get your HOOKS into the one and only original pirate adventure!
Jim Hawkins spends his life helping out at his mum's boring old inn by the sea, wishing he could sail away and have adventures. But when an old sea captain turns up with a secret, it's the start of a bigger adventure than Jim could ever have imagined - soon he's on a ship on the trail of buried treasure, accompanied by a suspicious sailor named Long John Silver ... Will Jim escape the pirates? Or will he walk the plank?
Climb aboard with Jim, a chatty parrot and a bunch of crazy pirates for a hilarious adventure across the seven seas.
Look out for more COMIC CLASSICS:
GREAT EXPECTATIONS:
Join Pip in a rip-roaring story of family secrets, scary grannies and a REALLY annoying big sister.
Get on the trail of THE HOUND OF THE BASKERVILLES
Solve the case with Holmes and Watson in a thrilling tale of mystery, murder and things that go woof in the night.
Praise for GREAT EXPECTATIONS:
A funny, thought-provoking treat, it's the ideal way into [Dickens] (Imogen Russell Williams Guardian )
Buy a copy of Jack Noel's retelling of Great Expectations before I set the dogs on you. Now, begone! ( Philip Ardagh, Roald Dahl Funny Prize-winning author )
It is BRILLIANT! ( Jenny Pearson, author of The Super Miraculous Journey of Freddie Yates )
Jack Noel's brilliantly witty art perfectly complements Dickens' Great Expectations , making this a fab KS2 text to sit alongside the classic. Brilliant for dyslexic kids who may struggle with Dickens' prose ... this book could bring a generation of kids to the classics ( Abi Elphinstone, author of Rumblestar, Sky Song and the Dreamsnatcher trilogy )
Jack Noel is a Jack of three trades: author, illustrator, designer, who works mainly on children's books and is a co-host on the Down the Rabbit Hole children's books podcast. Once upon a time Jack sent this tweet, and rest is history (history with doodles): https://twitter.com/jackdraws/status/965492074157166592
https://jacknoelillustration.tumblr.com 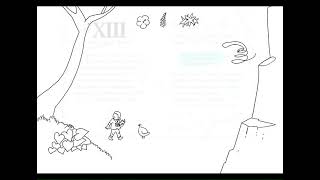 I remember him as if it were yesterday, as he came plodding to the inn door, his sea-chest following behind him in a hand-barrow.

Jack Noel   is a Jack of three trades: author, illustrator, designer, who works mainly on children's books and is a co-host on the Down the Rabbit Hole children's books podcast. In 1986 he won the Brighton Cooperative Beautiful Baby competition. Now Jack lives in London with his family and enjoys doodling in books belonging to dead Vi