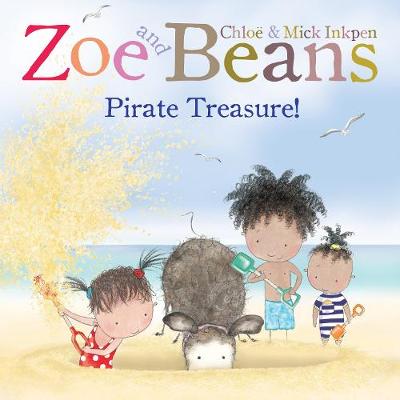 The sun is out so Zoe and Beans and best friend Oscar are off on a trip to the seaside. They've got buckets and spades and they're ready to search for buried pirate treasure! But digging is hard work and treasure is hard to find. It looks like it's up to clever Beans to sniff some out... A new story from the unstoppable Zoe and Beans and a perfect summer read, ideal for families off on a beach holiday - and any small pirates! Children will love joining in the hunt for pirate treasure in this sunny, fun-filled seaside story from the best-selling Chloe and Mick Inkpen, a star father and daughter duo. For more information, plus games and activities, visit the interactive website: zoeandbeans.com

Chloe Inkpen grew up surrounded by picture books and has a natural gift for storytelling. A love of language and art saw her swap an English degree course at Nottingham University for a degree in Illustration at the Glasgow School of Art. In her final year Chloe was awarded second place in the Macmillan Prize for Illustration. Chloe's events in schools, libr

Mick Inkpen Biography
Mick Inkpen is one of the world's best-selling children's illustrators and authors. His most popular books Kipper and Wibbly Pig have reached millions of young readers worldwide. His stories have been translated into over 20