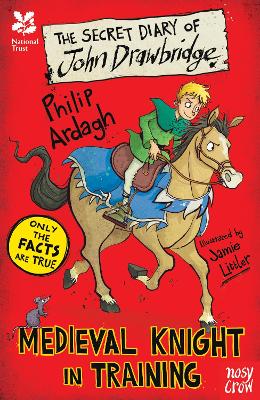 National Trust: The Secret Diary of John Drawbridge, a Medieval Knight in Training

The first book in a hilarious and exciting new series, from the winner of the Roald Dahl Funny Prize!

John Drawbridge has moved to Widemoat Castle to learn to become a knight. And there is a LOT to learn. . . How to charge with a lance on horseback without falling off. Why the spiral staircases always go up in a clockwise direction. How to defend the castle against invading parties. Why the plates served at banquets are made of stale bread (and why you shouldn't eat them...). And much, MUCH more. So it's no wonder that John decides to keep a diary (even if it is only an imaginary one...) of his time at the castle. Things REALLY liven up when the castle is attacked by an invading Welsh party - but can John foil their plot before it's too late...?
Perfect for fans of Horrible Histories, filled with amazing facts and historical trivia, with an exciting story and brilliant illustrations, you won't be able to put this SECRET DIARY down!
Read the other books in the series:
The Secret Diary of Jane Pinny, Victorian House Maid (and Accidental Detective)
The Secret Diary of Thomas Snoop, Tudor Boy Spy
The Secret Diary of Kitty Cask, Smuggler's Daughter

Roald Dahl Funny Prize-winning author Philip Ardagh is the author of The Grunts and National Trust: The Secret Diary series. He is probably best known for his Grubtown Tales, but he is author of over 100 books. He is a "regular irregular" reviewer of children's books for The Guardian, and is currently developing a series for television. Philip Ardagh is two

Jamie Littler Biography
Jamie Littler graduated from the Arts Institute at Bournemouth in 2008 and won a High Commendation in the Macmillan Children’s Book Award. He is the creator, writer and illustrator of the comic series Cogg and Sprokit which was serialized in the Phoenix Comic. He’s illustrated many children’s books including new edition