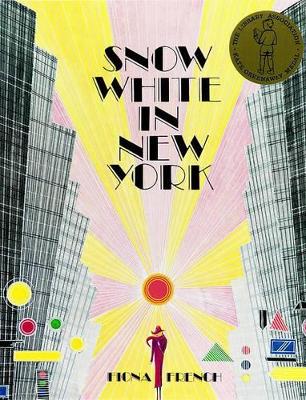 This is the tale of Snow White, transposed to New York in the 1920s. Snow White's wicked stepmother uses her position of influence in the city's underworld to contract the killing of Snow White. But the hired gun cannot shoot Snow White and abandons her instead to wander the streets. She stumbles into a club where the seven jazz-men take pity on her and she joins their band. A reporter who hears her sing propels her into the headlines . . . but her fame puts her once
again in the sights of her evil stepmother. She is poisoned with a cocktail cherry. A shocked city mourns the death of the beautiful and talented Snow White but as her coffin is carried up the church steps by the grief-stricken jazz-men, Snow White's eyes open and her gaze is met by the reporter.
They fall in love and live happily ever after.

Fiona French attended art college in Croydon, concentrating on painting but she also studied photography, theatre design and sculpture. In addition to Snow White in New York, her other books include Cinderella and Maid of the Wood. She lives in Norton, Norfolk, England.