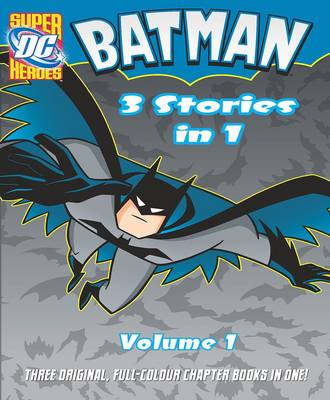 Book Rating: 1 based on 1
1 Review
Write a Review

This colourful, action-packed chapter book contains 3 great Batman adventures: Arctic Attack, Catwoman's Halloween Heist and The Man Behind the Mask. A colourful, action-packed chapter book with 3 great Batman adventures. In Arctic Attack, while researching the Arctic for a school project Robin learns that something is melting the glaciers - and it's not just global warming! In Catwoman's Halloween Heist, Batgirl and Robin are invited to the biggest Halloween party of the year. But one of their hosts' prized artefacts is missing! Can they capture the cat burglar? In The Man Behind the Mask, many years after the death of his parents, Bruce Wayne comes face to face with their killer, and recalls the story of his own past.

Robert Greenberger began his career at Starlog Press. He then joined DC Comics as an assistant editor, and eventually became Manager of Editorial Operations. In 2000, Bob became a Producer at Gist Communications, but then returned to comics in 2001 as Marvel's Director of Publishing Operations. In 2002, he went back to DC Comics as a Senior Editor in its col

Eric Fein is a freelance author of more than 40 fiction and nonfiction books and graphic novels. His books for Capstone include "Impossible Victory: The Battle of Stalingrad", "D-Day: The Battle for Normandy", and "Weapons, Gear, and Uniforms of World War I".

Michael Dahl is the prolific author of the bestselling Goodnight, Baseball picture book and more than 200 other books for children and young adults. He has won the AEP Distinguished Achievement Award three times for his nonfiction, a Teacher's Choice award from Learning magazine, and a Seal of Excellence from the Creative Child Awards. And he has won awards