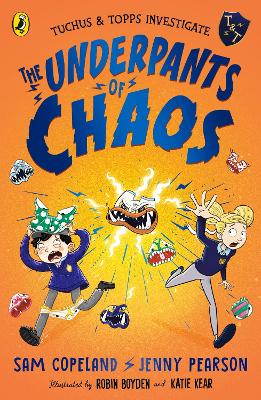 The Underpants of Chaos Reviews | Toppsta

"I should have realised that there was going to be something SERIOUSLY weird about a town called Little STRANGEhaven."

Something BAD is happening at Little Strangehaven Primary.

What are the peculiar SHIVERS that keep striking the school, bringing Strangeness in their wake -
from uncontrollable ballroom dancing to an attack by military chickens?

Spy-detective Agatha Topps is determined to find out. She's the only person who doesn't forget the Strangeness as soon as it's over. At least, until new boy Lenny Tuchus turns up and remembers too.

Their spy-detectoring leads them to the Book of Chaos, an ancient text which has been hidden away in the Room of Forbidden and Dangerous Books. Can Agatha and Lenny fight off attacks from evil underpants and Transylvanian gargoyles to stop the SHIVERS before their town is sucked into oblivion?

Because power lies in books - especially this one . . .

The perfect story for 7 to 9-year-olds (or STRANGE adults) and fans of Ben Miller, David Walliams and Tom Fletcher. Packed with hilarious illustrations and easy-to-read text, discover the secrets of Little Strangehaven.

The Underpants of Chaos Reviews | Toppsta

Sam Copeland is an author, which has come as something of a shock to him. He is from Manchester and now lives in London with two smelly cats, three smelly children and one relatively clean-smelling wife. Sam also works as a dinosaur de-boner, removing skeletons from dinosaurs and giving them to museums. Once the museums have finished with them, he then re-bo

Jenny Pearson has been awarded six mugs, one fridge magnet, one wall plaque and numerous cards for her role as Best Teacher in the World. When she is not busy being inspirational in the classroom, she would like nothing more than to relax with her two young boys, but she can't as they view her as a human climbing frame. Her debut novel, The Super Miraculous