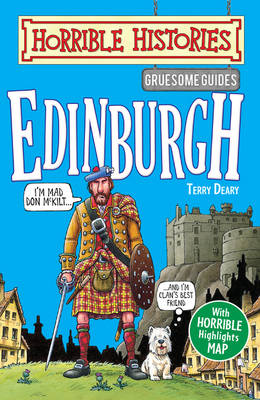 It's history with the nasty bits left in!
Want to know:

Whose pickled skin became a sought-after souvenir?
Why it's alright to spit on the High Street?
How the pupils of Edinburgh High School got away with murder?
Plot your path to the past with a frightful full-colour map of the
city's horrible highlights - climb up the cursed castle for tales
of reckless raids and hit the High Street for a whole host of
historical horrors!

Terry Deary is the author of over 300 fiction and non-fiction books, which have been published in 32 languages. His historical  fiction  for older children Tudor Terror has been praised as 'a marvellous blend of fact and fiction' (School Librarian). His non-fiction has been consistently in the best-seller lists since 1994. His Horrible Histories celebrated t

Michaela Morgan has written many popular books for children. Her work includes junior fiction, picture books, poetry and non-fiction. Among her many achievements she is an award winning author, short-listed for the Blue Peter Book Award, the Children's Book Award, named an International Reading Association Children's Choice and won a United Kingdom Reading A