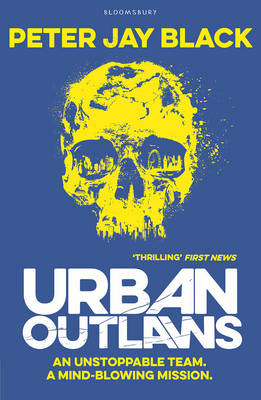 Meet the URBAN OUTLAWS: Jack, Charlie, Slink, Obi and Wren. Five quick-thinking, super-skilled kids who live to right society's wrongs. From their bunker deep beneath the city of London, the Outlaws plan their missions, stealing money from the rich to give to those in need. But events spiral out of control when they accidently uncover the whereabouts of Proteus - a game-changing new quantum computer with the power to steal top-security secrets in a nanosecond. It's down to the guile, guts and gadget know-how of Jack and his team to carry out their greatest plan yet - and avert world domination.

After spending most of his school years daydreaming, Peter Jay Black went to Arts University Bournemouth. A career in IT followed. His brilliant imagination never left him though and, one day, when a team of super-skilled kids popped into his head and showed him their hideout - a WWII bunker hidden under London - he knew he had to write about their adventure