Pizazz is the brand new super series from Sophy Henn, (no, really super - with powers and stuff!).

Pizazz is a 9 year old superhero - but she is not too happy about it. Her superpower is the worst ever, her sister is annoying, her family are embarrassing and her cape constantly gets in the way. But can she learn to embrace her super status and enjoy her adventures fighting the bad guys?

We love this funny series for ages 6+. It is highly illustrated in Sophy's signature style, which readers might know from her Bad Nana series, with comic strips and cartoon-like characters. Perfect reading for fans of Dog Man, Tom Gates and Dork Diaries.

Toppsta reviewer Amelie, aged 8, loved the books and had the chance to send over some questions for Sophy - read on to find out how Sophy goes about writing her books, what her superpower would be and more in our Q&A.

Book two Pizazz vs the New Kid is out now.

May I start by saying what marvellous questions these are...

1) What was your favourite character from a book as a child?

Hmmm, that's tricky as I had a few favourite characters, but I do have a real soft spot for Grandma Swap from Janet and Allan Ahlberg's Cops and Robbers. She's a naughty nan and part of the Robbers gang and *SPOILER* while all the other robbers get rounded up by the heroic PC Pugh, Grandma Swag creeps away and keeps up to her old tricks.It's so sneaky, using the fact that no one is looking at the old lady to her advantage, like Miss Marple and maybe another nana.....Brilliant!

2) What’s your favourite character from a book you have written?

Hmmmm, also tricky as I have a few favourite characters of my own. Obviously Bad Nana deserves a mention as I explained in the last answer and I want to be her when I grow up. But I have to say Pizazz has a very special place in my heart. I can remember being 9 ish so vividly, starting to grow up a bit and realising all the stuff about fitting in and standing out and finding your gang and all that. It's really hard, great too obviously, but there are tough situations to negotiate. That's why I created Pizazz, I mean I found it tough enough to fit in myself and I wasn't even slightly a super hero in a super heroes costume with a super heroes name. I am really enjoying writing about her and watching her learn through the tricky situations and getting stuff wrong, and keeping on!

3) What job would you want to do if you weren’t an author, and have you always wanted to be an author?

Well, I think I have but I did other things first because I don't think I thought I was a good enough writer to be an author. So I went to fashion college which I enjoyed but I just wasn't fashionable enough! And then I worked in advertising which was fun and taught me a lot about putting words and pictures together cleverly, so that together they say much more than either could on their own. Then I illustrated and designed for Paperchase. Then FINALLY (when I was a mummy) I admitted I would like to be an author/illustrator and went back to school and wrote and illustrated my first book while I was there. So it took a while, but nothing was wasted as everything I have done helps me write and illustrate now!

I did. I LOVED mystery stories when I was little and actually I still do now. And I quite clearly remember getting a snazzy new clipboard one christmas ( I think I was about 9 or 10) and deciding that that clipboard was going to be the thing I wrote my first ever murder mystery on. Sadly I only got as far as page one because I rather over complicated it, but it was an action packed page!!! But I have always liked writing and drawing.

5) In Pizazz her superpower is a glitter storm, if you could have a super power what would it be?

I know it's boring but I would have flying, I mean FLYING!!!!! It would just be so AMAZING. But if, like Pizazz, flying was sort of like my standard super power and I had a more spectacular extra one, maybe we could incorporate my love of tap dancing into it somehow....tap a tsunami?

6) When coming up with books do you start with the pictures or the writing?

I usually start with pictures, specifically pictures of characters. Then I try to work out what that character's story is, or maybe I imagine dropping them into a situation that I think has lots of potential for laughs or a great story. Then I let that story play out in my head, a bit like a little movie, where I follow them around and see what they get up to. And that is how some of my stories start, it just LOOKS like I am staring at the ceiling!!

7) How do you first get your ideas for your books?

Well, sometimes it's the way I described above or sometimes I remember something about my childhood, or my daughter's childhood and that will start an idea. OR maybe I am on the train and I over hear something brilliant and that starts a story. Basically ideas for books can come from anywhere, the trick is to be looking and listening when the arrive!

8) Since your books are so funny, at school were you a really good kid or the class joker?

Well, THANK YOU! That is the best thing to hear! Hmmmm, I think I was a little bit of both. When I was younger I was very VERY shy and was a good student. Then when I got older and bit more confident I think I was still mainly good, but I would enjoy a giggle (the one where you are in a situation where your absolutely must NOT giggle - THE BEST!), but probably not so much I was the class joker.

9) My favourite joke is, Why did the man with one hand cross the road? To get to the second hand shop! What’s your favourite joke?

THAT is a brilliant joke. I like "There are two cannibals eating a clown and one says to the other..."Does this taste funny to you?"'

10) Pizazz is often embarrassed by her superpower, what’s your most embarrassing moment?

You are absolutely right when you say that Pizazz is embarrassed by her super power but I am very much hoping she gets to a point where that is not the case. And in that vein I try not let anything embarrass me too much. Just pick yourself up, dust yourself down and move on!

Watch Sophie read the first chapter of book 1 below, plus you can download free super activity sheets here. 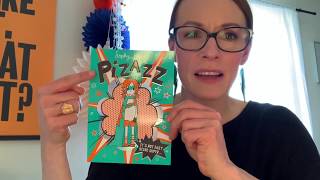 The first in a super (like, actually, with powers and stuff) NEW series for 7+ readers from the amazingly talented illustrator and author Sophy Henn! Brimming with Sophy's hilarious signature illustrations, this is the perfect read for fans of Dork Diaries, Tom Gates, Amelia Fang, Wimpy Kid and Dog Man.

"A SPECTACULAR superhero story that fizzes with fun on every page!" - Liz Pichon , author of the bestselling TOM GATES series.

Being a superhero is the best thing ever, right? WRONG!

HELLO! My name is Pizazz and I'm a superhero...

You probably think that's really AWESOME and while it can be, it's also REEEEEEEAAALLLLY annoying.

Don't believe me? Well, I have to wear the same outfit ALL THE TIME?! I'm always dashing off to save the world right in the middle of fun stuff. Plus I have to be the good guy even when I might not want to be. And sometimes I just want to be, well, normal. BEING A SUPERHERO IS THE BEST THING EVER, RIGHT? WRONG!

HELLO! My name is PIZAZZ and I'm a superhero . . . You probably think that's really AWESOME, and while it can be, it's also REEEEEEEAAALLLLY annoying.

I guess it was sort of going OK (I say, "sort of" - I still have to wear a silly cape and save the world all the time) until this NEW KID showed up, and started WOWING everyone with their super powers. Yep, SUPER POWERS - just what this town needs, another super . . . Who just happens to have the coolest name ever: Jett .

And now, because of Serena and her gang of Populars, I have to compete against Jett in an almighty and ultimate SUPER-OFF.

But it's fine. I mean, even if I lose, there's space for two SUPERS in this school, isn't there?!

PRAISE for PIZAZZ:
"Blocky comic-style panels, a fire-farting granddad and a conservationist message make for accessible, quirky reading" - Guardian , Children's Book of the Month
"Sophy Henn's funny new series [...] a witty and original reminder that superheroes are human too" - Sunday Times , Children's Book of the Week
"Full-page illustrations, comic-strip sequences, quirky typography and dramatic chapter openers ensure this book will appeal to more reluctant readers" - The i
"Sophy Henn's lively, energetic story should be a hit with anyone who finds it hard to fit in" - Financial Times
"Perfect for fans of her previous series Bad Nana, with the same level of illustration and zany text throughout" - Booktrust All the Fun of the Fair VIEW COMPARE PRICES