Hope Jones is a schoolgirl determined to do her bit to save the planet! She has started a campaign against plastic pollution and now, in Hope Jones Will Not Eat Meat, she is on a mission to save the animals, trying to persuade her friends and family to go vegetarian.

Hope Jones is a great series by author Josh Lacey, for ages 7+ and everyone who wants to change the world.

Written as a diary, filled with blog posts letters and posters, as well as Beatriz Castro's brilliant illustrations, the Hope Jones books are easy and fun to read and perfect for teaching kids that you are never too young to make a difference.

Read an extract of the new book Hope Jones Will Not Eat Meat here.

Two pupils at Coleham School, Gwen and Eva, were among the first reviewers of Josh's latest book and loved it!

Here is what their teacher had to say:

“Our year 5 pupils read this book and absolutely loved it! Two girls read it in one night and came racing to me with their reviews. Our pupils love reading series books and this eco series cleverly hits a gap in the market. Written through Hopes blog entries, it can engage readers with short chapters and illustrations.  Full of facts, debate and opinion on eco matters and sensitively covering misconceptions. All eco warrior children should enjoy this.”


We gave Gwen and Eva the chance to ask Josh some questions about the book, his writing and the environment - read on to find out more!

Q1: Who is your favourite character in your book Hope Jones Will Not Eat Meat?

My favourite character is Hope. She’s optimistic, determined, and, as her name suggests, full of hope.

Q2: Why did you base your book on vegan and vegetarianism?

Hope Jones wants to save the world - and to do her own small part to combat climate change. In the first book that I wrote about her, Hope Jones Saves the World, she stopped using plastic. I wanted to write about another small change that any of us make to our own lives: changing our diet. Factory farming is a significant cause of climate change. In fact, as Hope discovers in the book, the factory farming of vegetables, fruit, and grains also has a significant effect on the climate. The issue is more complex than it first appears.

Q3: What inspired you to write this book?

I was worried about climate change - not so much for myself, but for my children, and their children. We are slowly destroying our environment. We need to start clearing up our own mess. Of course we don’t want to. No one likes cleaning up. We would all prefer to make a mess, but not bother clearing it up. But just as we all have to tidy our own rooms, so we need to clean up the mess that we’ve made of our planet.

Q4: How many times did you have to draft this book out?

I’ve lost count! I always write and rewrite my books many times. I often write the first page over and over again before I start writing anything else.

Q5: Are you a vegetarian or vegan yourself?

No, I would describe myself as a reducetarian and a flexitarian. I try to reduce the amount of meat that I eat, and I am flexible in my diet, eating meat on some days, and a vegetarian diet on other days.

Q6: Why did you make Hope have chickens of all things? My friend said she would have chosen pigs.

I like pigs too, but it’s quite difficult to keep pigs where Hope lives. She only has a small garden.

Q7: Are you passionate about saving the planet?

Yes. I hope you are too.

Q8: What was your dream job when you were younger?

I wanted to be an astronaut.

Q9: Why did you choose the name Hope Jones?

I knew I wanted to write about a character who is full of hope. I also knew that she is quite ordinary. She wants to save the world, but she’s not a superhero. She is not “the Chosen One”. She doesn’t have any special powers. So I wanted a name that was both full of hope and quite ordinary.

Q10: Are you going to write a sequel to your book?

Yes, the third Hope Jones book is coming out in the summer. It’s called Hope Jones Clears the Air. In that story, Hope tackles air pollution around her home and her school. She also visits a wonderful city full of cyclists - Amsterdam. 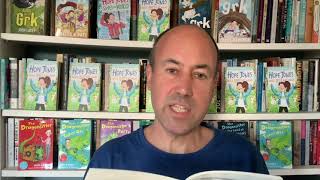 Hope Jones Will Not Eat Meat

You're never too young to make a big difference, as Hope Jones has learned in her fight against plastic pollution. Now she's on a mission to save the animals, and persuade everyone she knows to turn vegetarian. But just how can Hope get Dad to give up his beloved bacon butties? My name is Hope Jones. I am ten years old. I am going to save the world. Hope Jones' New Year's resolution is to give up plastic, and she's inspiring others to do the same with her website hopejonessavestheworld.com. When she realises her local supermarket seems to stock more unnecessary plastic than food, she makes it her mission to do something about it. She may be just one ten-year-old with a homemade banner, but with enough determination, maybe Hope Jones really can save the world.

From Picture Books to Chapter Books