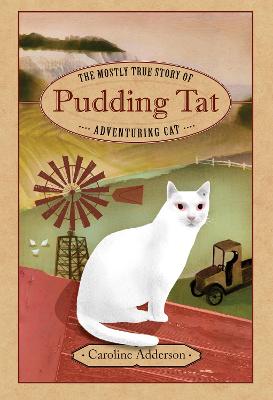 Pudding Tat is born on the Willoughby Farm in 1901 - just another one of Mother Tat's kittens. But it turns out that Pudding is anything but ordinary. He is pure white with pink eyes that, though beautiful, do not see well, and hearing that is unusually acute. He finds himself drawn to the sweet sounds of the world around him - the pattering heartbeat of a nearby mouse, the musical tinkling of a distant stream.
Soon the sounds of adventure call to Pudding, too. But before he can strike out into the wide world on his own, he hears a voice - coming from right inside his own ear. A flea has claimed Pudding as his host. The bossy parasite demands that Pudding take him away from the lowly barn and the drunken singing of his fellow fleas. He doesn't want adventure but a finer life - one where he can enjoy a warm bed and blood flavored not with mice, but with beef tenderloin and cream.
Fortunately for this mismatched pair, the world is an extremely interesting place in 1901. Over the next decade and a half, Pudding and his flea find themselves helping to make history - a journey over Niagara Falls in a barrel, a visit to the Pan-American Exposition on the day President McKinley is shot, a luxurious stay in Manhattan with songwriter Vincent Bryan, a terrifying trip on the airship America , and a voyage on the ill-fated Titanic.
Through each narrow escape, the call to adventure for the cat, and luxury for his disgruntled flea, beckons them on, right to the devastation of a World War I battlefield. Then Pudding is filled with a new longing, one that brings him, with his flea's help now, full circle and back home.


No one has written a review for 'The Mostly True Story of Pudding Tat, Adventuring Cat'