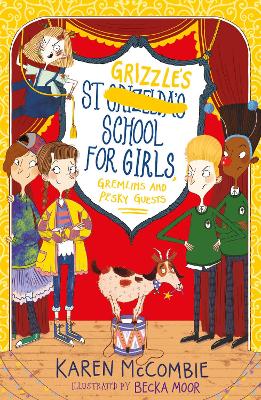 When a flood closes the village school, Lulu invites the staff and pupils to come and join them at St Grizzle's. Dani and her friends can't believe their bad luck - it was awful enough bumping into Spencer and his cronies in the village but now they've got to share lessons with them. Before long pupils are clashing with pupils, there are pranks aplenty and even the teachers aren't getting along. Rehearsals get underway for the school show but with tempers fraying it's soon looking like a big failure. Determined that the show will go on, Lulu calls on Dani and co, as the oldest children in the school, to set a good example and make friends. But with Spencer up to his usual tricks, can the two rival groups put aside their differences long enough to turn a disaster into a triumph?


This warm, funny series based in the maddest of mad boarding schools, is perfect for fans of SCARLET AND IVY and A MURDER MOST UNLADYLIKE .

Karen McCombie is the bestselling author of over 80 books for children and teenagers, including the series Ally's World, Angels NextDoor and You, Me and Thing, and has sold over 1 million books worldwide. Before becoming an author she worked for teen magazines such as J17 and Sugar. Originally from Scotland, she lives in London with her husband, young daught

Becka Moor Biography
Becka Moor is a children's book illustrator and storyteller living in Manchester. She studied illustration for children's publishing at Glyndwr University, graduating in 2012. Since then, she has worked on a variety of fiction books and series as well as picture books.