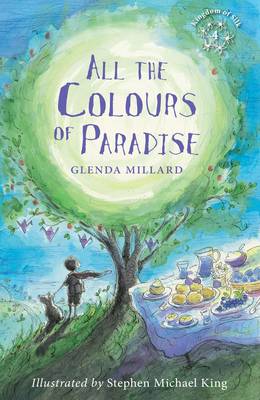 All the Colours of Paradise

The fourth book in the Kingdom of Silk series. Since his arrival at the Kingdom of Silk, Perry Angel has learned a lot about love. Apart from dressing up as Superman, Perry's favourite thing in the entire universe is drawing. But then something happens, and his friends are worried that he might never draw again. Mr Kadri from the Colour Patch Cafe understands that sometimes there are no words to describe our feelings. So when he announces a new category at the annual art exhibition, he gives Perry all the colours of Paradise, just in case he needs them. - REVIEWS - "If you haven't heard of the Kingdom of Silk books then it's high time you discovered them, as the series is going from strength to strength. Author Glenda Miller's latest instalment All The Colours of Paradise focuses on the story of Perry Angel, who is still finding his feet the world with the help of the Silk family.Addressing themes of love, understanding and family, it's an insightful and affecting read for older children, while avoiding heavy-handed sentimentality or cliche.Peppered with gorgeous little illustrations by Stephen Michael King, fans of the Kingdom of Silk will not be disappointed by the fourth in the series.
Although it may feel like a rather long wait until the fifth book hits bookshelves in September" -- Alison Potter, JUNIOR MAGAZINE. "Most of the story is seen through Perry's eyes, as he adjusts to his new life and surroundings and this gives the text a moving undertone of innocence. Witnessing Perry's gradual realization that his new family and friends deeply care about him is poignant to say the least. As he struggles to make sense of his feelings, his musing, such as "Love is like chocolate, melting in the quiet dark inside of you", have the power to choke up even the most hardened adult reader. But while the writing is always deeply emotional, it is never becomes sentimental. The Silks epitomize the goodness of people, the importance of family, of celebrating difference, but the story is never sappy. Sad and joyous, yes. Full of yearning, love for those lost, yes. But never over-sentimental.Issues of bullying, fitting in, learning difficulties and even teenage pregnancy are dealt with with a lightness of touch which is all the more effective. Millard's deceptively simple style is like honey to one's soul. Rarely has a series of books had such an effect on me.
Never have I felt such yearning to be part of a fictional family. Never have I cried both of sorrow and elation as much as I have with every single book in this series. It really is a magnificent series" -- Melanie McGilloway, LIBRARY MICE. "Told with real empathy and a deep understanding of family relationships and our inbuilt need for friendship, this is a gentle and charming story" -- PARENTS IN TOUCH

All the Colours of Paradise Reviews | Toppsta