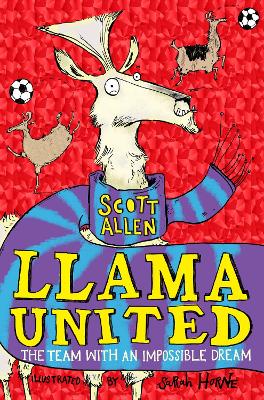 It's time to get behind the football team with an impossible dream! What happens when eleven llamas unknowingly eat the ashes of one of the greatest footballers of all time? They become brilliant at football, of course! Managed by eleven-year-old Tim, his unusual friend Cairo and Scottish World Cup-winner McCloud (yes that 'happened' apparently), Llama United goes on an amazing cup run. But who wants to lose to a team of stupid llamas? Nobody, that's who! Rival teams will do anything in their power to stop Llama United in its tracks. When the best cup in the world is at stake, football can be a nasty old business . . . Scott Allen's Llama United is full of football funnies and laugh-a-minute llamas, illustrated by Sarah Horne. Support the team in the second hilarious Llama United book when they go to the World Cup in Llamas Go Large .

Scott Allen was brought up in the horse racing town of Epsom. After discovering he was too tall and heavy to be a jockey he turned his attention to football. At sixteen he started writing for fanzines before becoming a professional sports writer, editor and digital content specialist. He is a West Ham supporter, but we don't hold that against