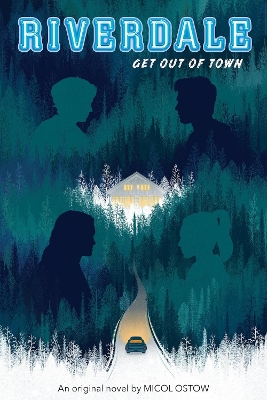 Get Out of Town (Riverdale, Book 2)

Get Out of Town (Riverdale, Book 2) Reviews | Toppsta

When Archie, Betty, Veronica and Jughead take a road trip,
they discover that their small-town problems seem to follow
them wherever they go...
The gang heads out for an epic road trip to Chicago to visit Archie's
mom.
When Archie's too busy daydreaming to drive, Veronica takes
the driver's seat - naturally. Betty wants to see
the important sights, and Jughead just wants to find the best diners.
They're all so preoccupied that they almost miss the red
pickup truck that seems to be everywhere they are...

Could it be a coincidence or could the troubles of Riverdale have
followed them across state lines?
Other titles in the series include:

Riverdale: The Day Before
Also available - The Riverdale Student Handbook

Get Out of Town (Riverdale, Book 2) Reviews | Toppsta

This is Book 2 in the Riverdale Series. See all Riverdale books here.

Micol Ostow is half Puerto Rican, half Jewish, half student, half writer, half chocolate, half peanut butter. When she is under deadline, she is often half asleep. She believes that the whole is greater than the sum of the parts except in the case of Chubby Hubby ice cream. She lives in New York City where she reads, runs, and drinks way too much coffee. Lea