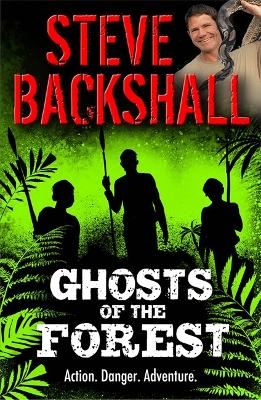 The Falcon Chronicles: Ghosts of the Forest: Book 2

The Falcon Chronicles: Ghosts of the Forest: Book 2 Reviews | Toppsta

From the DEADLY 60 TV presenter and BAFTA AWARD winner Steve Backshall, comes the second novel in THE FALCON CHRONICLES series, GHOSTS OF THE FOREST. Catch up with Saker and Sinter as they reunite to save endangered orang utans in this vivid adventure story.

Saker and Sinter are travelling in Asia. Sinter is nursing in the shanties of Ho Chi Minh city. Saker is with the peace-loving Penan helping them protect the orang utans and save their own forest homes, as unscrupulous loggers wreak destruction.

But they are being watched. And hunted. The Prophet has not forgiven their betrayal.

Escaping the Clan takes Saker and Sinter on a deadly, dangerous journey through Vietnam, over the South China Sea back to Borneo. Deep in the jungle, they're reunited on their most daredevil and audacious mission yet, to save the endangered orang utans before they become ghosts of the forest.

Steve Backshall is the hugely popular and fearless presenter of the BBC kids' series DEADLY 60 and LIVE AND DEADLY as well as star of BBC's Strictly Come Dancing 2014.

The Falcon Chronicles: Ghosts of the Forest: Book 2 Reviews | Toppsta

Steve Backshall is well-known as a TV presenter, wildlife enthusiast and explorer. He travels the world to learn about the most inspiring animals, from boxing mantis shrimp to charging tigers. Steve also regularly writes articles for newspapers and magazines and is an inspirational public speaker. Steve's website is www.stevebackshall.com, and you can follo