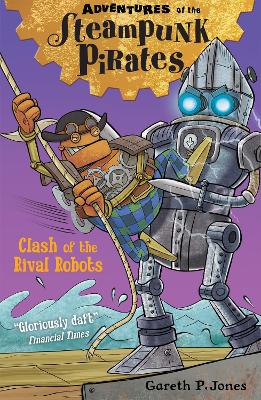 Clash of the Rival Robots

Wanted: Dead or Alive! (Or smashed into little bits and delivered in boxes.)


The Steampunk Pirates are lured back to England by the promise of gold. But the appearance of their inventor, Mr Richmond Swift, signals big trouble. He has a new army of robots and it's not long before sparks begin to fly. Have the pirates finally met their match?

This hilarious new series from Gareth P. Jones, author of Ninja Meerkats, is sure to delight young readers with its madcap humour and larger-than-life robot pirate crew. Perfect for fans of Jonny Duddle's The Ghostly Galleon and the Space Pirates books, looking for more swashbuckling action!

Gareth P. Jones (Author)  Gareth lives in South East London and divides his time between writing books, producing TV and spending time with his wife and son, Herbie. His books include The Considine Curse which won the Blue Peter Book of the year prize.     Garry Parsons (Illustrator)  Garry studied fine art at Brighton College and went on to study illustrati

Adventures of the Steampunk Pirates BOOKS