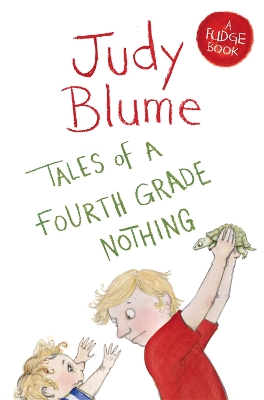 Tales of a Fourth Grade Nothing Reviews | Toppsta

Peter thinks he has the world's biggest problem - his naughty little brother, Fudge. Fudge causes trouble wherever he goes and it's usually up to Peter to sort out the mess. When Peter wins a tiny green turtle called Dribble, he's determined to keep it away from his brother. But when Fudge does get his hands on Dribble - disaster strikes! Tales of a Fourth Grade Nothing is the first book in the hilariously funny Fudge series from the bestselling author and household name Judy Blume, featuring cover art from picture book star, Emily Gravett.

The chaos continues in Otherwise Known as Sheila the Great and Superfudge .

Tales of a Fourth Grade Nothing Reviews | Toppsta

This is Book 1 in the Fudge Series. See all Fudge books here.

Judy Blume has been winning legions of fans around the world with her stories. More than 82 million copies of her books have been sold, and her work has been translated into thirty-two languages. She receives thousands of letters every month from readers of all ages who share their feelings and concerns with her. In addition to her hilarious