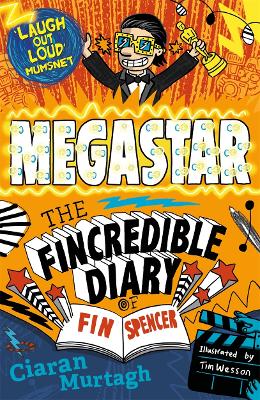 Fin has promised never to use his diary again. A little old lady gave it to him at a funfair and it turned out to be magic - it let him change what happened during the day as long as he made a wish that evening. But it was more trouble than it was worth and got him into all sorts of scrapes at school and at home. But he needs help. A newish boy, Cliff Sharpnel, is stepping on his toes. Not only does he play the guitar, but he's interested in Claudia Ronson - the most beautiful girl at school.
When their teacher, Mrs Johnson, announces that she has written a musical called HOT RODS Fin thinks he's too cool to audition. Until he discovers that the hero gets to kiss the girl at the end - mostly likely to be Claudia - and that Cliff has put himself up for the part! Fin has some serious backtracking to do. The diary HAS to come out again. And in his fight to become the Oscar-winning megastar Fin has to scramble to 'do' and 'undo' the havoc that ensues . . .

Ciaran Murtagh is an actor, comedian and author. He has appeared in and written for two series of The Slammer on CBBC. His other TV writing credits include Dick and Dom, Planet Ajay, Scoop and Hotel Trubble. Piccadilly also publish his award-winning GENIE series. He lives in London. Follow Ciaran at www.ciaranmurtagh.com or on Twitter: @CiaranMurtagh.

Nikalas and Tim are the author/illustrator team behind the Mega Mash-Up series. They write and draw together and laugh a lot. They met when Nikalas, who was working as a designer, thought Tim would be a good illustrator for some books he was working on, and then found out that they lived across the road from one another in south-east London. A pint lead to