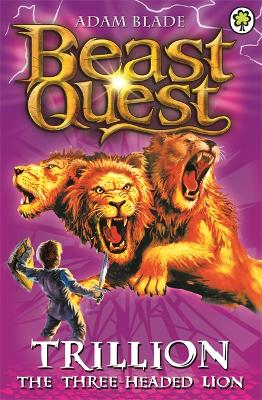 Battle fearsome beasts and fight evil with Tom and Elenna in the bestselling adventure series for boys and girls aged 7 and up.

The Evil Wizard Malvel has stolen the magical suit of golden armour and scattered it throughout Avantia. Tom vows to find the pieces - but they are guarded by six terrifying new Beasts! The peace of Avantia has been shattered by a fearsome new Beast - Trillion the Three-Headed Lion. If he is to save the kingdom, Tom must defeat Trillion get the final piece of the magical golden armour. Will he succeed?

There are SIX thrilling adventures to collect in the Beast Quest: The Golden Armour series: Zepha the Monster Squid; Claw the Giant Monkey; Soltra the Stone Charmer; Vipero the Snake Man; Arachnid the King of Spiders; Trillion the Three-Headed Lion.

If you like Beast Quest, check out Adam Blade's other series: Team Hero, Sea Quest and Beast Quest: New Blood!