There's A Spider In This Book. Are You Brave Enough To Take A Look?

Here at Toppsta we have divided opinions on spiders - whilst I (Liz Binks) would run and hide under my duvet at the mere sight of one, Georgina would quite happily pick a spider up. BUT, after reading Claire Freedman's hilarious new picture book, There's A Spider In This Book, I have to say that I am feeling a lot warmer towards these little creatures.

The story is told from central character Eric the spider's point of view and he literally did have me at 'Hello!'.  Who couldn't soften to this sweet-natured goggly-eyed being who just wants to be friends with everyone and can't understand why people scream and run away from him. I wish this book had been around when I was little - it may have stopped a lifelong fear!

Check out some of my favourite spreads below. I love Mike Byrne's colourful illustrations which really bring little Eric's personality to life! 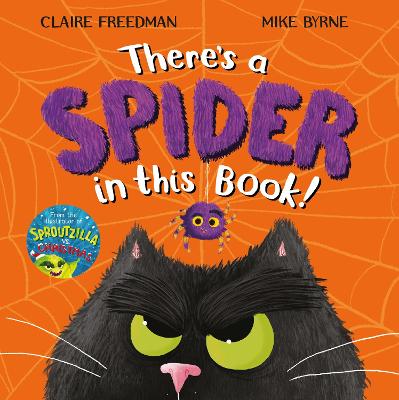 There's A Spider In This Book

There's a spider in this book. Are you brave enough to take a look?

Eric the spider can't understand why people scream and run away from him. He only wants to say hello. But Fluffy the cat wants to eat Eric, so he's hiding. It's up to the reader to find Eric on every spread and maybe finally catch a glimpse of him with the surprise lift the flap ending . . .

A funny and engaging story written by internationally bestselling author, Claire Freedman, and brought to life by Mike Byrne's hilarious and colourful illustrations.