Joseph Elliott's Shadow Skye series is a must for fantasy fans aged 10+.

Set in an alternate Scotland, filled with mythical creatures, the books are thrilling, dark and full of heart and imagination.

Book 1, The Good Hawk, follows the adventures of Jamie, a reluctant Angler who is afraid of the sea, and Agatha, a clansman with Down's syndrome, who patrols the sea wall defiant of all those who judge her. When disaster strikes, the pair make a terrifying journey to a land of forgotten magic.

The second book, The Broken Raven, is out now and sees the addition of a new character - Sigrid, a Norvegian girl with an unusual gift. All three must fight to save Skye from terrible threats but, in a world of shadows, hope can be found...

Toppsta reviewer, Edie May, aged 13, loved both books, saying of The Broken Raven "There were heart-stopping twists, ferocious battles and bucketfuls of suspense... I can't recommend it enough!". She had the chance to ask Joseph some questions about the books and his writing.

Read on for the full Q&A!

1) Do you feel that there is enough representation of the disabled community in the world of writing?

To be totally honest, no. There are some great books out there, but in the grand scheme of things, it is a very small percentage. That’s one of the reasons I wanted to write The Good Hawk; I was working in a special educational needs school at the time and wanted to create a character that the children I was teaching could relate to. It’s so important for every child to see themselves reflected in the books they read.

2) What made you decide to introduce another main character (Sigrid) into the second book in the trilogy?

One of my biggest fears when writing The Broken Raven (book 2) was that I would end up writing a story that was too similar to The Good Hawk (book 1). Sigrid helped me avoid that; she’s a boost of originality and helps keep the series fresh. It was also important to me to show a positive side of the Norvegian community. In The Good Hawk, the deamhain are all seen as ruthless killers; Sigrid – who comes from Norveg, is noble and empathetic – gives an alternate perspective.

3) Your writing style is very unique: each chapter is not only from the POV of one of the main protagonists, but it is also written as they themselves would think it. Do you find this difficult?

It actually makes it easier for me to write. I think because I’m an actor, having distinct voices helps me get inside the characters’ heads, and then I just let them do the talking. I also love the creative freedom it gives me – especially when writing Sigrid – to play around with language and make up new words.

4) Do you have any personal links to Scotland, and the Isle of Skye?

I’ve spent a lot of time working in Scotland over the years, and I also trekked the width of the country when I was a teenager – a similar journey to that made by Jaime and Agatha in The Good Hawk. When I was writing the first book, I spent a week holed away in a bothy on Skye and went out walking every day for inspiration. It’s such a beautiful island.

5) If you could change one thing in either of the books, what would it be - would you even want to change anything at all?

Now that’s an interesting question! I don’t believe in regrets, so I’ll have to say I wouldn’t change anything. There comes a point in the writing process – after you’ve edited and re-edited a book what feels like a hundred times – that you have to let go and know you’ve done your absolute best. No regrets!

6) Are any of the characters based on personal or famous people and icons, or do they even represent bigger themes?

Lots of the characters have aspects of people I know (including myself!) in them, but none of them are based solely on one person. The characters themselves don’t represent themes; it’s more that through their actions and experiences, the themes in the book are revealed.

7) Did the ideas for the Shadow Skye Trilogy accumulate over a long period of time, or had you always had the inspiration to write this series from the start?

When I first had the idea, it was just Agatha, on a wall, looking out to sea. I could hear her voice really clearly in my head and just started writing her story from there. The rest of the novel developed organically as I wrote. It wasn’t until I reached the end of book one that I decided I wanted to make it a trilogy.

8) Do any of the more mythical characters and creatures (like the sgàilean and the Badhbh) come from Scottish folklore, or your own imagination?

I’ve always loved mythology, so there are elements that have crept in from many different cultures: Scottish, Greek, Norse… The majority are from my imagination, though; one of the things I enjoy most about writing these books is inventing my own mythology and folklore.

9) The Clann-a-Tuath islanders have many rules about what is dùth or not; are any of these based on real regulations from past tribes which inhabited Skye?

None of the rules are specifically based on Scottish history; they’re more timeless and universal. There are many cultures throughout the world that have at one time (or still do) hold similar values. As the books progress, both Jaime and Agatha are forced to question which they believe in and which they ought to challenge.

10) If you had to be Jaime, Agatha or Sigrid, who would you choose?

Another great question! I’m not sure I could choose between them… Can I be a mix of three? I’d take Jaime’s compassion, Sigrid’s determination and Agatha’s unwavering self-belief. 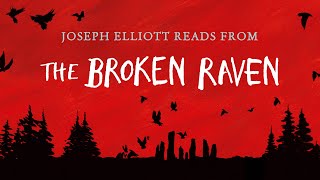 Book 2, The Broken Raven, is out now and you can read an extract here or watch the video of Joseph reading aloud.

What Toppsta readers are saying about the series:

"I really loved The Good Hawk, and I think (with the addition of Sigrid) I love The Broken Raven even more!"
Edie May, aged 13

"The story was full of twists and turns and had amazing characters."
TobyA!, aged 11

"it is a fabulous story: engaging, shocking and simply a joy to read."
Miss S, Teacher Reviewer

"This is a bold and beautiful tale of loyalty, friendship and understanding."
Westy10, aged 14

"as soon as I started to read it I couldn't stop. The storyline is amazing."
ArwenLOTR, aged 12 If everything was taken from you, what would you do to get it back?

Agatha patrols the sea wall with pride, despite those in her clan who question her right to be there, because of the condition she was born with.

Jaime is a reluctant Angler, full of self-doubt and afraid of the sea.

When disaster strikes, the pair must embark on a terrifying journey to a land where forgotten magic and dark secrets lurk in every shadow...

Thrilling and dark, yet rich with humour and compassion, this novel marks the debut of a wonderful new voice in fantasy and a welcome new kind of protagonist - perfect for fans of The Girl of Ink and Stars , Garth Nix and Michelle Paver.

NOMINATED FOR THE 2021 CILIP CARNEGIE MEDAL

LONGLISTED FOR THE 2020 HIGHLAND BOOK PRIZE The extraordinary second book in the epic Shadow Skye trilogy.

In a world of shadows, hope can be found...

Agatha and Jaime have rescued their clan and returned home to Skye as heroes. But when Agatha uncovers a threat to their people, she unwittingly releases a terrible power that could kill every living thing on the island. Jaime must race to Scotia to hunt an ancient blood magic, which may be their only chance of survival.

Meanwhile, Sigrid, a Norvegian girl with an unusual gift, journeys to the court of Ingland where a dangerous alliance is forming - one that will soon turn its vengeful eyes to Skye. Sigrid will have to risk everything if she and the people of Skye are to survive the gathering shadows...

Praise for the Shadow Skye trilogy :

"A story fantasy-loving young readers may not even know they've been waiting for." New York Times

"Packs a real punch with its high-level suspense." BookTrust