Michelle Paver is an internationally bestselling author, who is much-loved by children and adults alike.

Her award-winning fantasy series the Chronicles of Ancient Darkness, which started with Wolf Brother, thrilled readers when it was first published back in 2004. Set in the Stone- Age, it told the story of Torak, Renn and Wolf and their adventures in a world of demons and Hidden People.

This year, Michelle has returned to the world of Wolf Brother with her brilliant new book Viper's Daughter. Although it is set in the world of the Chronicles of Ancient Darkness, it can be read as a stand-alone and we recommend it for readers 9+

Read Michelle's guest blog below to find out why she has written this new book, why reading is so important and more about her writing process.

"I'm writing this in south London in the early days of "lockdown", and like all of us I'm trying to adapt to the new normal.  In my case that means supporting a sister in self-isolation with symptoms of Covid-19, an 89-year-old mother who lives alone and depends on me - and trying to write a book.  (All of which is, I know, nothing compared to what many others are dealing with.)

So why a new book? The short answer is my publishers have been planning this for over a year, and the books are printed, the audiobook recorded by Sir Ian McKellen.  But it's also because people need stories, now more than ever.

Two days before schools had to shut in the UK, I wrote to a primary school teacher in Cumbria, who'd sent me her classes' letters about WOLF BROTHER.  I had fun answering their questions, and the most frequently asked was: "Can you write a sequel to the WOLF BROTHER books?"

I've been hearing that for years from readers of all ages (the youngest is six, the oldest ninety-nine). I never planned to go beyond the sixth book, but the pleas of fans - plus a great idea for a plot that came to me on a trip to arctic Norway - finally changed my mind.

Hence VIPER'S DAUGHTER.  It's a standalone story, you don't need to have read the previous books to enjoy it.  I wrote it both for existing fans, and for new readers who want a rich, immersive adventure in an entirely different world.  And I do mean adventure!  My aim is to make it impossible for the reader to put the book down.

If you're new to the world of WOLF BROTHER, VIPER'S DAUGHTER is about a boy, a girl and a wolf, battling to survive in the Stone Age.  Torak is the best tracker in the Forest.  Renn is an amazing shot with a bow and arrow.  Wolf is a wolf, and parts of the story are told from his point of view: through his eyes and ears, and crucially, his nose.

VIPER'S DAUGHTER starts when Renn realises that Torak is in danger - and she's the threat.  She leaves, and to find her, Torak and Wolf must trek north, to the Edge of the World: a hostile waste of ice caves, volcanoes, and mammoths... 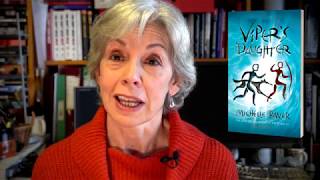 To make VIPER'S DAUGHTER real for readers, I went to Alaska and outer Siberia.  I travelled on an ice-breaker through the Bering Straits.  One day I was standing in the bow watching humpback whales feeding when suddenly a whale surfaced so close to the ship that I feared we'd hit it.  For an instant its brown eye met mine. Then it dived beneath the waves, narrowly avoiding a collision.  I used that incident in VIPER'S DAUGHTER, and it was just one of my experiences which enriched the story.  Others included: crawling under a glacier, getting close to polar bears and trying a Native American cure for toothache by licking a leopard slug (it worked!).

Torak and Renn are hunter-gatherers, so in Siberia I visited the Chukchi, who still live a traditional hunting life.  Like the Chukchi, Torak and Renn depend on the natural world.  Everything they need for survival has to be found or made from what's around them, so they know all about the animals and plants in their world.  They don't take more than they need, and when they kill an animal, they don't waste any part of it. Readers of all ages really connect with the "survival" aspects of the stories, and with my characters' respect for the natural world.

However only a tiny part of all this research finds its way into the finished books, and it's there purely to serve the story: to make the reader feel they're living alongside Torak, Renn and Wolf.  VIPER'S DAUGHTER is an adventure.  I don't want to slow it down! (That said, I'm delighted that the WOLF BROTHER books have found favour with archaeologists, and are taught in schools.)

I'm often asked if I write differently for children, as compared to my Gothic stories for adults, DARK MATTER, THIN AIR, and WAKENHYRST.  No I don't, except for one thing.  I try to make sure that no child will feel worse about the world after reading one of my books.  So while Torak's world can sometimes be dark and scary, Wolf is there to reassure.  Fiercely loyal, he regards Torak and Renn as members of his pack.  I visualise the bonds of love between them as a golden thread lighting up the dark.

That's VIPER'S DAUGHTER.  I really hope you enjoy it!"

Thank you to Michelle for this wonderful insight into the book.

You can read an extract of Viper's Daughter here and download activities and learning resources related to the book here.

Check out our reader reviews below and by clicking on the book:

"This book was gripping from start to finish. I will definitely be reading all the other books and re reading this one too."

"An engaging book, with strong, authentic characters. Interesting, in that it is set in the Stone Age."

"I like the author’s style of writing; it is full of suspense..." A boy. A wolf. The legend lives on.

Viper's Daughter is the seventh book in the award-winning series that began with Wolf Brother , selling over 3 million copies in 36 territories. Like them it can be read as a standalone story.

For two summers Torak and Renn have been living in the Forest with their faithful pack-brother, Wolf . But their happiness is shattered when Renn realizes Torak is in danger - and she's the threat.

When she mysteriously disappears, Torak and Wolf brave the Far North to find her. At the mercy of the Sea Mother and haunted by ravenous ice bears, their quest leads them to the Edge of the World. There they must face an enemy more evil than any they've encountered.

Viper's Daughter plunges you back into the Stone-Age world of Torak, Renn and Wolf: a world of demons, Hidden People and exhilarating adventure which has entranced millions of readers. Books to Get Kids Outside