5 stars across 1 book
Jay Jay Burridge studied Fine Art Sculpture at Central Saint Martin's College of Art and Design. For his degree show he made a forty-foot-long, self-assembled dinosaur skeleton out of MDF.

After graduating, in 1994 he took over from the legendary children's TV presenter Tony Hart writing and co-presenting the TV show SMart for the BBC. This grew into three spin-off series and touring live shows. After eight years with the BBC, Jay Jay then turned his attention to a career in commercial art for brands such as Sony, Adidas, and Levis. It was not long before he started up his own custom-made deluxe trucker cap brand, Lucky Seven Caps.

In the summer of 2010 he returned to his favourite subject of dinosaurs and exhibited his supersaurs sculptures in a one-man show in Beverly Hills, LA. The 80,000 square-foot space was filled with 15 full-sized supersaurs. With his friend Jamie Oliver, he co-created the Dinersaur Diner, situated in the heart of Piccadilly Circus.

Jay Jay lives in Oxfordshire with his family. 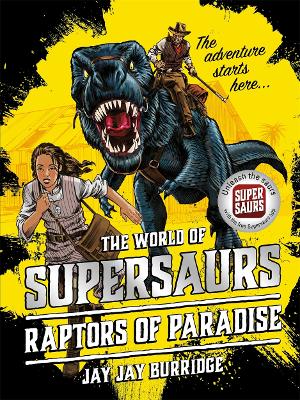 A thrilling new adventure series: what would the world look like if dinosaurs had never died out? Imagine a world where... More