5 stars across 1 book
SF Said (Author)
SF Said's first book, Varjak Paw, won the Nestle Smarties Prize for Children's Literature. The sequel,The Outlaw Varjak Paw, won the BBC Blue Peter Book Of The Year. Phoenix is his third book. He has written widely about literature, films and the arts for The Guardian and The Daily Telegraph; and works regularly with CLPE, promoting reading and literacy in schools.
For more information on SF and his books, please visit www.sfsaid.com

Dave McKean (Illustrator)
Dave McKean has illustrated and designed many ground-breaking books and graphic novels including Varjak Paw (SF Said), The Magic of Reality (Richard Dawkins), The Savage (David Almond) and The Graveyard Book (Neil Gaiman). He wrote and illustrated Pictures That Tick and the multi-award winning Cages. He has created hundreds of CD and comic covers and directed five short and three feature films. 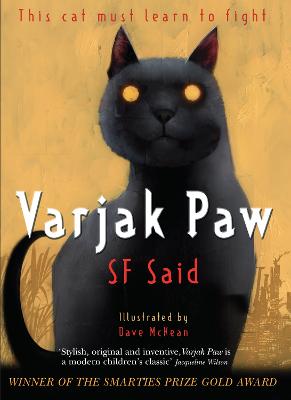 Varjak Paw is a Mesopotamian Blue kitten. He lives high up in an old house on a hill. He's never left home, but then his... More