Nandana Dev Sen is an award-winning actor, writer, and child-rights activist. After studying literature at Harvard and filmmaking at USC, she worked as a book editor, a screenwriter, a short film maker, a poetry translator, and as Princess Jasmine in Disneyland. Nandana grew up in India, England, and America, and has acted in over 20 feature films from all three continents (and in multiple languages). As an ambassador and advocate, Nandana works closely with children (and grown-ups) at Operation Smile, RAHI (India's first organization for survivors of child sexual abuse), and UNICEF, to promote child protection and to fight against child abuse. Nandana frequently writes for newspapers and journals, has translated her mother Nabaneeta Dev Sen's book of poems Make Up Your Mind, and is the author of the children's book Mambi and the Forest Fire. Kangaroo Kisses is her debut children's book in the U.K. Nandana lives in New York, Kolkata, and London, and has been quoted to say that she loves to "eat, bike, rhyme, dance, and argue."


Pippa Curnick was winner of the Seven Stories Illustration Competition in 2012. She has worked as a designer for Alison Green Books and is now a freelance designer and illustrator. She enjoys using hand drawn textures and typography and her work is greatly inspired by nature. Pippa lives in Measham, Derbyshire. 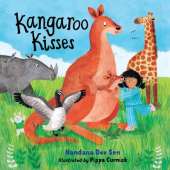 It's time for... bed! Not yet! Elephant must floss, to make his teeth gloss! Then I'll brush f... More