Karamo Brown is a TV personality, producer, and host who fixes hearts and minds as the Culture Expert on Netflix's Emmy-winning series, Queer Eye . He made history in 2004 when he appeared on MTV's The Real World as the first openly gay African American reality TV star. In 2007, Karamo learned he had a nine-year-old biological son, Jason, and gained full custody. He later adopted his son's half-brother, Chris, and left the spotlight to become a social worker before making his return to TV. He lives in Los Angeles with his fiance and two sons.

Jason Brown is a rising young star in Hollywood who has studied dramatic and comedic acting at the University of California, Los Angeles. He often draws on his own life to entertain and inspire, including his experience connecting with his father, Karamo Brown, at the age of ten. Jason lives in Los Angeles, California.
Anoosha Syed is a Pakistani-Canadian illustrator based in Toronto, who has a passion for creating charming characters with an emphasis on diversity and inclusion. She has illustrated picture books for clients including Random House, Simon & Schuster and Disney Publishing, with Bilal Cooks Daal being her most recent publication. Anoosha is also a freelance character designer and has worked with Disney Jr and Dreamworks TV. 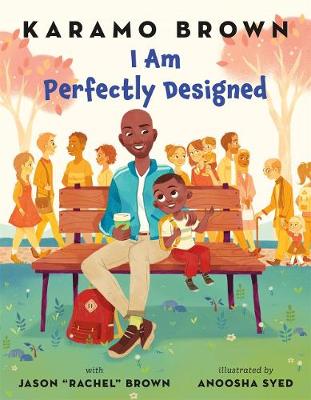 I Am Perfectly Designed
28th November 2019

"With tenderness and wit, this story captures the magic of building strong childhood memories. The Browns and Syed celeb... More