4 stars across 1 book
Juno Dawson (Author)
Queen of Teen 2014 Juno Dawson is the multi award-winning author of dark teen thrillers HOLLOW PIKE, CRUEL SUMMER, SAY HER NAME and UNDER MY SKIN, written under the name James Dawson. In 2015, she released her first contemporary romance, ALL OF THE ABOVE. Her first non-fiction book, BEING A BOY, tackled puberty, sex and relationships in a frank and funny fashion, and a follow-up for young LGBT people, THIS BOOK IS GAY, came out in 2014.

Juno is a regular contributor to Attitude Magazine, GT and the Guardian and has contributed to news items concerning sexuality, identity, literature and education on BBC Women's Hour, Front Row, This Morning and Newsnight. Juno's titles have received rave reviews and her books have been translated into more than ten languages. In 2015, Juno announced her transition to become a woman, having previously lived as James Dawson. She writes full time and lives in Brighton. Follow Juno on Twitter: @junodawson or on Facebook at Juno Dawson Books.

Olivia Hewitt (Author)
Dr Olivia Hewitt is a clinical psychologist who has worked in the NHS since 2003. Whilst at university in north Wales she met co-author Juno Dawson. She went on to train at the University of Oxford. Since then she has specialised in working with people with a learning disability as well as writing for academic journals and lecturing at the universities of Southampton and Oxford. Outside of work, Olivia can be found reading detective novels and helping out on the farm. She lives with her husband in Oxfordshire.

Gemma Correll (Illustrator)
Illustrator Gemma Correll is one of the few people in the universe who has managed to turn her love of pugs into a lucrative career. She has exhibited her illustrations all over the world: in China, the US and Europe, and was the recipient of a Young Guns award from the Art Directors Club of New York in 2010. She's a serial punner with a crush on all things cartoony and studied Graphic Design in Norwich. Her favourite colour is turquoise, her star sign is Aquarius and her favourite word is Albuquerque, just in case you were wondering. Follow Gemma on Twitter: @gemmacorrell. 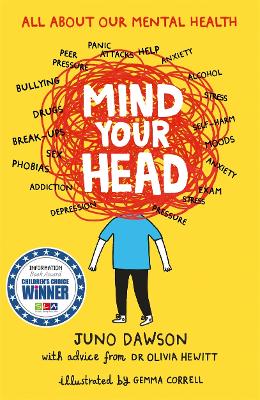