Geraldine McCaughrean has been writing for children for over 25 years and is author of Peter Pan in Scarlet , which was one of the most successful children's titles of 2006. Geraldine has won the Carnegie Medal, the Whitbread Children's Book Award (three times), the Guardian Children's Fiction Prize, the Smarties Bronze Award (four times), the Blue Peter Book of the Year Award. Geraldine is the first author to have been shortlisted for the Carnegie Medal six times.

Maria Nilsson grew up in Sweden but moved to London in 2001. She studied BA Illustration at the University of Westminster. After graduating she worked as a freelance illustrator until the birth of her children. When they started toddling, Maria took up her pencil again and in 2009 was shortlisted for the Picture This competition (Macmillan and Waterstones' search for a new illustrator). 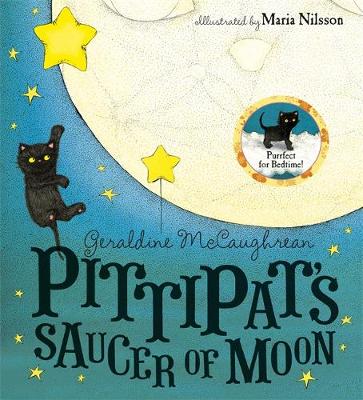 Pittipat knows that the moon is a saucer of cream and his brothers and sisters mean to drink it all up. So the brave l... More