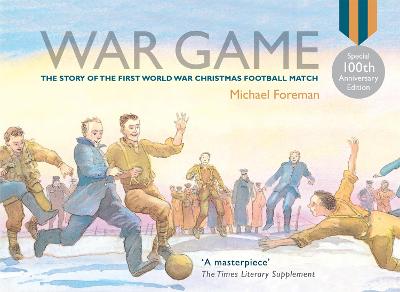 "A masterpiece" - The Times Literary Supplement

"The work of a major children's author at his peak" - The Daily Telegraph
"An unforgettable experience" - The Guardian
A special lavishly-illustrated edition of Michael Foreman's classic children's book about the First World war and the legendary Christmas Day cease-fire football match in no-mans-land.
It's 1914 when everything changes for a group of boys growing up and playing football in the Suffolk countryside. Far away, in a place called Sarajevo, an Archduke has been killed and a web of global events results in a call for all British men to do their duty 'for King and Country' and join the army to fight the Germans overseas. The boys sign up for what sounds like an adventure and a chance to see the world. After basic training the lads sail to France where they find themselves fighting on the front line. Living in the trenches in constant fear for their lives is nothing like they expected and only a bombed-out wasteland, no-man's-land, separates their trenches from those of their German enemies. Then, on Christmas Day, something remarkable happens as the German and British armies stop fighting and meet in the middle of no-man's-land. The enemies talk, play football and become friends. But the war isn't over, the two sides resume fighting and the group of Suffolk lads are ordered to charge across no-man's-land...

Michael Foreman is one of the most talented and popular creators of children's books today. He has won the Kate Greenaway Medal twice and his highly acclaimed books are published all over the world. He is married and has three sons. He divides his time between St Ives in Cornwall and London.