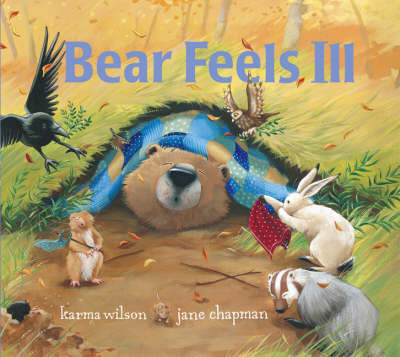 Achoo! Poor Bear is not feeling well - he's achy, sneezy and has a stuffed-up nose. He coughs and shivers and doesn't feel at all like playing outside with his friends. Mole, Hare and Mouse, and the rest of the gang try to make Bear feel as comfortable as possible in his cave. They wrap him in a blanket and fetch him some warm tea... and soon, with the care of his friends, Bear starts to feel better. But then just as he's ready to go outside and play, Mouse and Hare start to sneeze... now all his friends have caught Bear's cold. With gentle care and love Bear looks after his friends just as they looked after him.

Karma Wilson is the author of the New York Times best-sellers Bear Snores On and Bear Wants More, both illustrated by Jane Chapman. She lives just outside of Bonners Ferry, Idaho. Jim McMullan is an award-winning illustrator whose work has appeared in a variety of books for adults and young readers

Jane Chapman has been illustrating for Little Tiger Press for over twenty years and has produced many best-selling and award-winning titles. She lives in Dorset, England, with her husband, illustrator Tim Warnes. They have two sons.