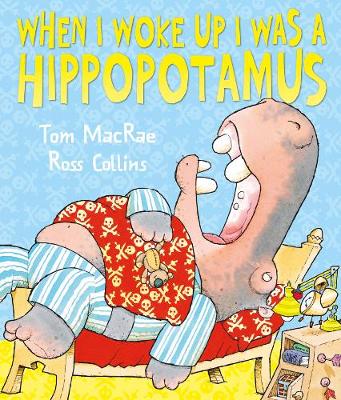 When I Woke Up I Was a Hippopotamus

When I Woke Up I Was a Hippopotamus Reviews | Toppsta

"When I woke up I was a hippopotamus.
Yawning in the morning, I raised up my sleepy head,
Then took one look out of the window
and got straight back into bed."

A small boy's fantasies about being different creatures get him into all sorts of mischief!

When I Woke Up I Was a Hippopotamus Reviews | Toppsta

Tom Macrae is best known as a BAFTA-winning scriptwriter for television: his work has been shown on both Channel 4 and BBC2. He has recently written several episodes for the new series of both Doctor Who and Miss Marple. His first book for children, The Opposite, was published by Andersen Press in 2006. Nick Ward is the creator of several hugely popular pi

Ross Collins was born in Glasgow and graduated from the Glasgow School of Art with a first in illustration, winning the Macmillan Children's Book Prize the same year. Since then he has illustrated over 100 children's book and has written 8, winning many prestigious awards including the Scottish Children's Book Award and Royal Mail Book Award. He lives i