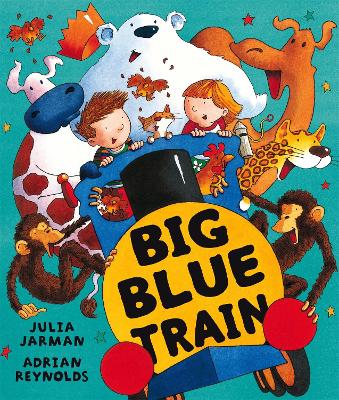 Toot toot! Hold tight! Ben and Bella are off on another adventure! This time with the Big Blue Train!
They set off for the seaside, with various animal friends jumping, leaping and squashing aboard along the way, but will everyone manage to squeeze on, and just why is everyone heading for the seaside?

A brilliant second title from Julia and Adrian, the team that brought you the bright and bouncy award-winning Big Red Bath.

Julia Jarman was a teacher before becoming a full-time writer of children's books. Her first book was a story she used to tell her children at bedtime, When Poppy Ran Away. Julia's Jessame stories, also for younger readers, have enjoyed years of success. Her older fictiion centres on historical time-slip fiction which links in with National Curriculum H

Michael Lawrence originally trained as a graphic designer and photographer, but subsequently became a television script reader, press officer, an art and antiques dealer, a painter and sculptor, and several other things he would rather not talk about. His first book, a novel for children, was published in 1995. He is now a full time author, creator of the po