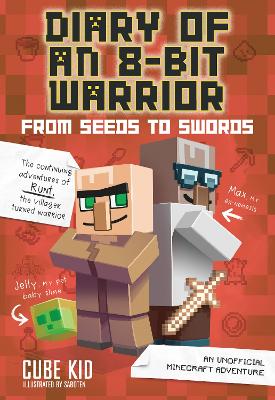 Diary of an 8-Bit Warrior: From Seeds to Swords: An Unofficial Minecraft Adventure

Diary of an 8-Bit Warrior: From Seeds to Swords: An Unofficial Minecraft Adventure Reviews | Toppsta

Minecraft meets Diary of a Wimpy Kid in book 2 of the very popular 8-Bit Warrior series of the journal of a young Minecraft villager who dares to dream of becoming a Minecraft warrior!

THESE ARE THE REAL BOOKS BY CUBE KID! DIARY OF AN 8-BIT WARRIOR: FROM SEEDS TO SWORDS WAS ORIGINALLY PUBLISHED AS WIMPY VILLAGER KINDLES 5-8.

Pet slimes. A potion brew-off. A creepy forest that no one will explain. What's a twelve-year-old warrior-in-training to do?

As Runt and his friends continue their battle preparation, they face their biggest challenges yet-and it's not just those zombies decked out in body armor (which is really weird, by the way). Runt's got a brand new nemesis who will stop at nothing to claim the top spot in the warrior competition at school. And, to make matters worse, there's a strange girl following him around wherever he goes. But old enemies will become new allies as the town rallies to save the school from a series of mysterious mob attacks. Can Runt and his friends take down the biggest, baddest boss mob yet?

Diary of an 8-Bit Warrior: From Seeds to Swords: An Unofficial Minecraft Adventure Reviews | Toppsta

Cube Kid is the pen name of Erik Gunnar Taylor, a 33-year-old author who lives in Alaska. A fan of video games-and particularly Minecraft-he started writing fanfiction at a very young age. His first novel, The Diary of a Minecraft Villager, was self-published as an ebook in February 2015 and quickly became tremendously successful in the Minecraft community.

Diary of an 8-Bit Warrior BOOKS