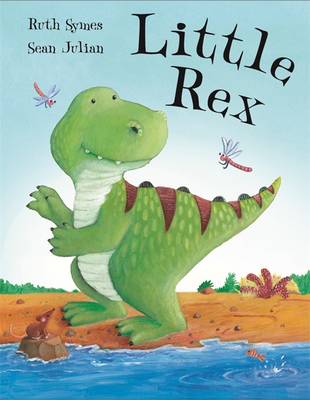 A funny tale about a little dinosaur who wants to be the BIGGEST dinosaur EVER!

Rex was the SCARIEST dinosaur in the whole world. He had the pointiest of pointy teeth, the sharpest of sharp teeth and the LOUDEST of LOUD ROARS!
The trouble is everyone else thinks Rex is just a funny little tyrannosaurus. "I'm not little, I'm BIG!" Rex keeps telling them.
Then one day he is looking after the eggs for his mum and dad when they start to hatch - and the baby dinosaurs are terrified to see a dinosaur as BIG as Rex!

This is Book 1 in the Little Rex Series. See all Little Rex books here.

Ruth Symes has written many novels and picture books, including the LITTLE REX and BELLA DONNA series for Piccadilly Press. She also writes dog books under the pseudonym Megan Rix, for Puffin, including the bestseller, THE PUPPY THAT CAME FOR CHRISTMAS. She was a resident writing coach on The Richard and Judy Show and was a judge on their 'Write a Children's

Sean was born in Derbyshire and studied at the Mansfield College of Art and then moved to Bristol to study Illustration. Sean being himself big and hairy, he was always happiest drawing Bears, Gorillas and other big hairy creatures. This naturally led him to a career in Children's books illustration. He still lives in Bristol with his girlfriend, with whom h