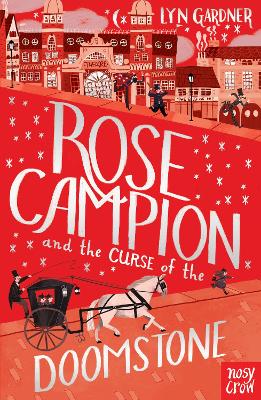 Rose Campion and the Curse of the Doomstone Reviews | Toppsta

Business has never been better for Campion's Palace of Variety and Wonders - and the music hall is about to open its doors to its biggest act yet: the Illustrious Gandini, the stage magician known as the Great Wizard of the North. But when the Doomstone Diamond - a priceless jewel with a disturbing history - is stolen during one of Gandini's performances, Campion's finds itself under threat once more, and Rose Campion and her friends will need all their wits about them to find the thief and uncover the secrets of the magician's mysterious past...

Rose Campion and the Curse of the Doomstone Reviews | Toppsta

Lyn Gardner was born in London. A theatre critic on The Guardian, she goes to the theatre five or six nights a week, which should leave no time for writing books at all. Prior to joining The Guardian she was a tea lady, a waitress, sold (or failed to sell) advertising space for a magazine called Sludge, wrote for The Independent and helped found the London l