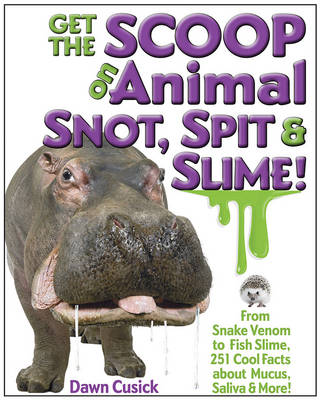 Get the Scoop on Animal Snot, Spit & Slime!: From Snake Venom to Fish Slime, 251 Cool Facts About Mucus, Saliva & More!

Learn amazingly icky facts, see the yucky photos, and gross out everyone you can! Welcome to a world filled with snot otters, puss caterpillars, spitting spiders, slime stars, snotties, and more! In Get the Scoop, you'll learn that snot, spit, and slime may seem gross, but there's a lot of amazing science in these icky fluids. Animals use them for communication, defense, to find food, to travel fast, and more. Jellyfish and corals produce "mucus nets" to capture prey. Parrotfish burp out a mucus blanket to sleep under every night, while sea stars and sponges release volumes of mucus to distract and discourage predators. Barracudas use mucus in their scales to increase their swimming speeds and protect them from parasites. Poison dart frogs release toxins with mucus. Hagfish secrete slime if another animal tries to eat them. Clams and mussels make "mucus strings" to bring food to their mouths. Hippopotamuses release "blood slime" that works as sunscreen and an antibiotic. Saliva helps animals in hundreds of ways, too. Anteaters and giraffes use sticky saliva to help them eat, while leeches, vampire bats, and ticks use chemicals in their saliva to help them feed on blood. Many mammals use saliva to help them recognize offspring and others spit saliva at predators and prey. The venom in shrews, snakes, and other reptiles comes from adapted salivary glands. Some animal saliva works like glue, helping swifts, termites, and wasps build nests.

Dawn Cusick has authored a dozen nonfiction children's books that have won national and international awards from the Animal Behavior Society, the National Science Teachers Association, the Children's Book Council's Children's Choice competition, and more. Her books have been profiled on NPR and Yahoo News. She teaches biology at Haywood Comm

Get the Scoop BOOKS