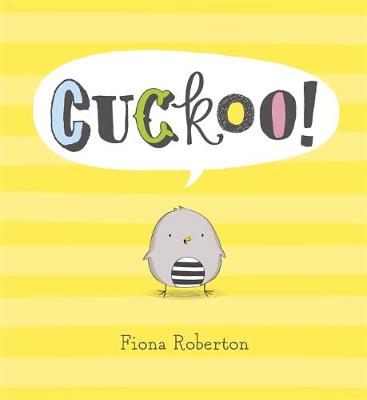 Book Rating: 4 based on 2
2 Reviews
Write a Review

A gorgeous story about accepting differences from the creator of Wanted: The Perfect Pet and The Perfect Present. Cuckoo is a bit different from all the other chicks. They too-woo-weet but he cuckoos! So he goes in search of a new home - but the sheep, frogs and cows don't understand him either. Will he ever find someone who is just like him? Fiona Roberton's universally appealing style is reminiscent of Oliver Jeffers and bound to win her many young fans. 'Drawn with pencil-sharp precision, Cuckoo is an irresistibly cute, round-bodied little bird with a jauntily striped belly and a resilient attitude. What family wouldn't want him in their nest?' - The New York Times

Fiona Roberton was born in Oxford and studied art and design in London and New York. She has lived and worked all over the world and is currently based in London. Fiona's debut picture book Cuckoo won the International Reading Association's Children's Book Award. She is the creator of the bestselling A Tale of Two Beasts, which has sold over 220,000 copies a