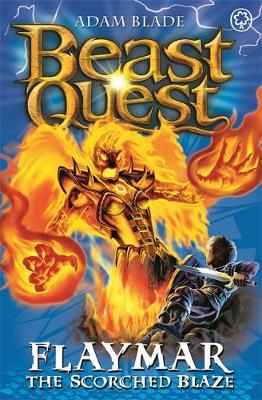 Battle fearsome beasts and fight evil with Tom and Elenna in the bestselling adventure series for boys and girls aged 7 and up. Tom must confront Flaymar the Scorched Blaze - Kensa the Sorceress's fiery Evil Beast - sent to terrorise the land! Can the Avantian hero overcome her fearsome heat and douse her flames? There are SIX thrilling adventures to collect in the Beast Quest: The New Age series: Elko Lord of the Sea; Tarrok the Blood Spike; Brutus the Hound of Horror; Flaymar the Scorched Blaze; Serpio the Slithering Shadow; Tauron the Pounding Fury. If you like Beast Quest, check out Adam Blade's other series: Team Hero, Sea Quest and Beast Quest: New Blood!