Top Ten Strangest Science Facts You Really Ought to Know Top Ten Strangest Science Facts You Really Ought to Know by Julia Golding, author of The Curious Crime.

The universe is a very strange place. I knew that before I started researching the history of science for The Curious Crime, but not quite how strange it would turn out to be! Investigate just a little and you quickly find out that reality is far stranger than anything fiction can dream up. My search for the Quest went from the cave artists of 35 000 years ago, via the Ancient Greeks, to the Islamic scholars and medieval monks, Galileo and friends, Newton and the Royal Society, Darwin and his contemporaries, right up to the present day. I’ve written a book on each, packed full of facts and fun, but here is a teaser of some of the strange facts you really ought to know!

1. Biology - Like animals? Then my first pick will please you: snoring dolphins, 4th century BC in Ancient Greece. In what was possibly the first ever live capture, mark and release zoological study, Aristotle investigated dolphins and found they make noises in their sleep. He suggested it was snoring. Modern zoologists agree that sleeping dolphins do make sounds (though they no longer call it snoring – shame!).

2. Physics - The first person to prove a heavier object does not fall faster than a lighter one was Galileo, right? No, wrong! Forget the Leaning Tower of Pisa experiment, Galileo was beaten to this conclusion by a thousand years. John Philoponus of Alexandria (Egypt) in 6th century AD carried out the same experiment and wrote up his findings. The reason you haven’t heard of him is that no one believed him because he was saying that Aristotle got it wrong and they didn’t like that. Galileo read John’s work though, so maybe John helped the Italian genius finally get rid of the (wrong) idea that heavier things fell faster?

3. Technology - Like cool new inventions? Guess who invented the first smart watch? The answer is Abbot Richard of Wallingford who lived 1292-1336. OK, it was really a clock in St Alban’s abbey but telling the time was the least of what it could do. The mechanism was full of what we would now call apps as it told you the state of the tides at London Bridge and it doubled as an astrolabe (star measurer).

4. Medieval science was cool. Do you think that Medieval scholars spent all their time on unscientific questions like, how many angels can dance on a pinhead? A lot of us do – and we are completely wrong. Medieval scientists did many exciting things that helped advance science, including investigating the rainbow, suggesting a scientific method for experiments, and they drew the first graphs. The bad press is largely thanks to the Black Death that stopped science in its tracks when it killed half the population of Europe, including many of these scholars.

5. What’s the best job to have on the way to being a scientist? To be a terrible shepherd. At least, that’s how scientific Titan, Sir Isaac Newton (1643-1727), started out. While he was supposed to be minding his family’s flock, he spent his time instead working out how to make little mechanical toys. The sheep may have scattered but he certainly collected his thoughts together!

6. Palaeontology (fossils) - The greatest dinosaur hunter is a woman. Forget Jurassic Park and meet Jurassic Mary. Mary Anning (1799-1847) lived in Lyme Regis near some cliffs that contained fabulous specimens. She overcame poverty, class and gender barriers to be acknowledged by scientists at the time as the best fossil finder.

7. Nuclear science - Have you heard that bananas are radioactive? It’s true: they contain a radioactive form of potassium. But don’t worry: you’d have to eat ten million in one sitting to get a fatal dose.

8. Award season - Who was the first scientist to be given two Nobel Prizes? I expect you’re picturing Einstein but, no! It was Marie Skłodowska Curie. She won prizes in Physics and Chemistry, (though sadly it is also true the Nobel Committee had to be persuaded into awarding her the first one because they wanted to give it only to her husband).

9. Astronomy - The Big Bang was almost nicknamed the Cosmic Egg. This was the preferred term of George Lemaître (1894-1966), a Catholic priest who was also the father of the theory that the universe came into being in such a way and has been expanding ever since.

10. Quantum physics - In the quantum world, things are even more strange. Particles (the smallest known things) can also be waves; they can appear on the other side of a barrier without passing through it; and they can spin in two directions at once. How strange is that? Oh, and you also can’t tell how fast they are going if you know where they are and vice versa… Is curiosity a crime? Ree discovers the unfairness of being a girl in a male-dominated scientific world, where alternative ideas are swiftly squashed. Enter a fantasy island where Phil the dodo and other unusual wild animals roam corridors, great halls, and the underground network of passages inside a magnificent museum and science academy. Prevented from following her creative passion as a stonemason, Ree is confined to cleaning the halls at night as a maid. But then the murders start happening... A determined scholar Henri and strong-willed Ree join forces to solve the mysteries and prove their innocence. 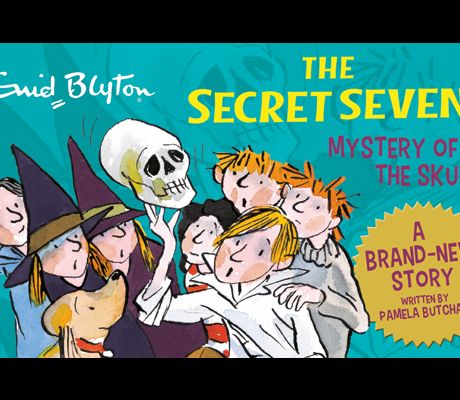 What I Love Most About The Secret Seven