The world’s only teen spy, Alex Rider, is one of the most popular book characters for young readers. The explosive action series aimed at 9-12 year olds was first published in 2000 and there are now ten books in the series as well as a prequel Russian Roulette and various graphic novel editions.

Written by bestselling British author Anthony Horowitz, the Alex Rider series has sold over 19 million copies worldwide and continues to thrill readers almost 20 years after its release. Horowitz is a master of action and crime, writing for both adults and children, including new James Bond and Sherlock Holmes novels as well as numerous TV episodes and films. Anthony Horowitz’s books have been described as “the not-so-secret weapon to get boys reading” thanks to the fast-paced plots, full of twists and cliff-hangers.

Having been made into a film (Stormbreaker) in 2006, the boy spy is now gracing the small screen in the new Alex Rider TV series on Amazon Prime. The first season, based on Point Blanc (book 2), was released this year (2020), starring Otto Farrant as Alex Rider.

It’s best to start at the beginning of the series to get the back story. Stormbreaker, book 1 in the series, introduces us to 14-year-old Alex Rider, a normal teenager thrust into working for MI6 in the wake of his uncle’s suspicious death. Before he knows it, he is operating in a murky world of secret gadgets, weapons, terrorists and most of all danger. We love the Alex Rider books for their fast-paced action and nail-biting mysteries and Toppsta readers do too. Check out their five-star reviews for these exciting adventure stories, recommended for readers aged 9+.

The new Alex Rider, Nightshade, came out in April 2020 and there is also a new book for this year's World Book Day – Undercover and a collection of short stories Secret Weapon.

Check out these Teachers Notes for KS2 and KS3! And if you've finished the series, check out our list of recommendations for books like Alex Rider.

All the Alex Rider books in order: The action-packed sixth adventure in the number one bestselling Alex Rider series. In the sixth book in the num... More Undercover in a poisonous world, teen spy Alex Rider is back for his seventh adrenalin-rush adventure! In the s... More Alex Rider's eighth, adrenaline fueled adventure in the number one bestselling series. In the eighth book in th... More The dark and shocking conclusion to the number one bestselling Alex Rider series. In the final book in the numb... More Step into the world of Alex Rider in this undercover collection of secret files created for World Book Day 2020. ... More 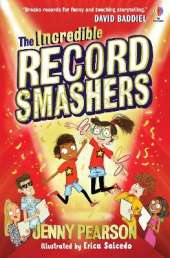 BOOK OF THE MONTH - Jenny Pearson is BACK with another fabulous, feel-good adventure, with illustrations by Erica Salcedo. Recommended for ages 8+