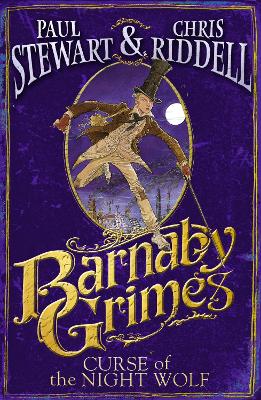 Barnaby Grimes is a tick-tock lad, running errands in his city, day and night, and 'high-stacking' around the rooftops in search of new mysteries to solve. In this first adventure, Barnaby is attacked one night by an enormous dog. He kills it - but that's not the end of this particular mystery . . . as Barnaby finds himself swept up in a world of crooked doctors, poor and ill-advised patients, strange tonics and very expensive furs... Could there be more to the seemingly respectable Dr Cadwallader and the tonics he doles out to the poor? Is there a link between the tonic and the huge dogs - or possibly wolves - that are roaming the city at night? When Barnaby's old acquaintance Benjamin goes missing, Barnaby fears the worst for him, and decides to dig deeper... A fantastic romp through a Dickensian-style city, with a wonderful new hero in the guise of Barnaby. This new series from the bestselling dream team of Stewart and Riddell is a must for all fans of the Edge Chronicles - but also for fans of Horowitz and Shan, as they move into new territory and deliver a brilliantly exciting thriller-horror for boys.

Chris Riddell Biography
Chris Riddell, the 2015-2017 UK Children's Laureate, is an illustrator and political cartoonist for the Observer. Many of his children's books have won a number of major prizes including the 2001, 2004 and 2016 CILIP Kate Greenaway Medals. Go