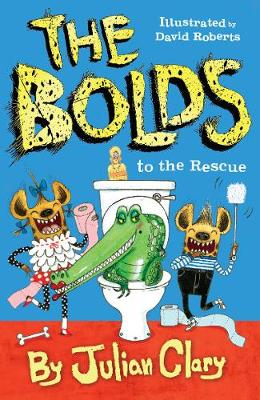 The Bolds to the Rescue

The Bolds to the Rescue Reviews | Toppsta

More wildly funny animal madness from dream team Julian Clary and David Roberts!
The Bolds are a family of hyenas living as humans in a suburban house. But now their kindness to animal waifs and strays has become legendary, and more and more animals keep turning up to stay! Roger the sheep flocks to their house, and Fifi the poodle turns up to learn some new tricks, whilst Sheila the crocodile decides to stay for a while.
But when the Bolds take in a couple of race horses who are on the run, they worry their animal magnetism is getting to be too much. Have these hyenas bitten off more than they can chew?

The Bolds to the Rescue Reviews | Toppsta

This is Book 3 in the The Bolds Series. See all The Bolds books here.

Julia Donaldson is the outrageously talented, prize-winning author of the world's best-loved picture books, and was the 2011-2013 UK Children's Laureate. Her books include The Singing Mermaid, What the Ladybird Heard and the modern classic The Gruffalo , which has sold over 13.5 million copies worldwide a

David Roberts Biography
Born in 1970 in Liverpool, David Roberts is an illustrator who has produced many picture books for younger children including collaborating with authors Julia Donaldson, Julian Clary and his sister Lynn Roberts who is also a writer. He has also worked with Alan MacDonald to create a series for older readers including titles su